Greta Kline—better known by her stage and band name Frankie Cosmos—is a prolific artist by any appellation. With more than 40 releases between her previous persona Ingrid Superstar and the current Cosmos moniker, Kline captures the difficulties of teen angst with her sweet and concise songs.

The topic of youth is a popular theme, not only in Kline’s songwriting, but also in every interview the Frankie Cosmos front-woman has done in support of critically acclaimed Next Thing, the band’s second major label album. On her song “Young,” Kline sings, “I wrote some songs that I sung/And have you heard I am so young.” Despite the subject matter, her songs show an artist developed well beyond her years.

Kline, 22, dropped out of New York University in 2015 to focus full-time on her music. The daughter of Academy Award-winning actor Kevin Kline and ‘80s icon Phoebe Cates, Kline has carved her own path to stardom with the Frankie Cosmos persona. Now, Kline and her band, consisting of Luke Pyenson on drums, David Maine on bass and Gabrielle Smith on backing vocals, are ready to shoot for the stars.

I spoke with Kline about crafting her stage persona, dealing with her “youthful” identity and writing songs for her 16-year-old self.

During “Young,” you sing about people viewing your youth as a gimmick. What would you rather people take away from your music?

That was about people coming up with this gimmick about my music instead of writing about it in a way that treats it like art. People talk about it like, “Oh, isn’t it impressive that she’s so young making these songs?” Or like, “Isn’t it cool that her parents are these famous people we’ve all heard of?” But, I’ve found it pretty annoying. I want people to listen to my songs as art and not think about me as much. I want it to be viewed as a piece and not looking at it like I’m a persona they’re interested in. I just write about myself. I happen to be young. I don’t think about youth necessarily being a theme in my music. It’s like saying being white is a theme in my music; it’s all I know. I’m not gonna write about some experience I don’t know about.

Do you ever get tired of the focus being on your famous parents?

It’s definitely been really weird, especially when people focus on my parents. I don’t have much to say about it because, to me, they’re my parents. They’re really nice and great. If they were going to mention my parents in an article, I’d prefer they also mention my band who have put much more work into my music than my parents. That’s my one pet peeve. I have a really good relationship with them, so I’m not really hurt by them being present.

On “Sinister” you sing “Sometimes I get sinister/Can’t always turn to Arthur.” You mention the influence singer/songwriter Arthur Russell has had on you in several interviews. In what ways has he inspired Frankie Cosmos?

I only really got into his music when I was 17. He just made so many different types of music and was really open and experimental. I latched onto that and found that to be really special. He’s not like my favorite musician ever, but he’s definitely one of them.

Next Thing is only about 20 minutes in total. You’ve mentioned only needing a short amount of time to say what you need to say. Is this a conscious decision to keep the songs short? 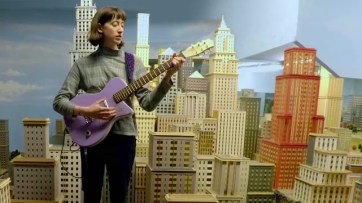 You’ve mentioned having stage fright. How does having the Frankie Cosmos persona help with that?

It’s really been nice to not have this project be under my name because it gives me a wall to step behind. If your project is just your name, it can oftentimes get presented as just being a singer/songwriter. Frankie Cosmos is a band, and it being a made up character gives me the space to be more vulnerable because it’s not Greta talking. It helps me write more fiction and emotional stuff because it’s a veil.

Did you feel any pressure after the success of your first album, Zentropy?

The only thing that really affected my feeling making [Next Thing] was knowing it would be coming out on vinyl and have a press cycle and tour around it. I tried to not let that affect the writing. I talked to Ezra Furman about this. When you’re making an album knowing you’re going to have it be an “album”—like you’re going to do interviews about it and play the 10 songs for a year on tour and pick a single and music video—all that stuff is really weird. It’s fun, but it’s totally unrelated to the art you’re trying to make. That was a test of my will to not think about that stuff while I was recording [Next Thing] and just think about it later.

You’ve said Next Thing is for 16-year-old Greta. In what ways is this true?

Personally, I felt like I had to write this for myself at 16. It’s all about looking back on situations with a new perspective. Every year that goes by in your life, you have new hindsight and maturity to look back on things that happened when you were younger. Hopefully, that will continue to happen to me. 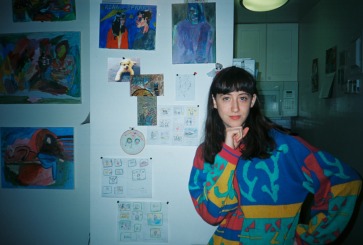 Have you interacted with any fans that were inspired by your lyrics?

At the [April 16] show, I got a letter from a 16-year-old fan that reminded me of something I would’ve written at that age. I sat down and talked to her for so long after that. It’s a weird position to be in to have young people hear what I’m making because it means it might affect the way they might view their life. That’s a scary responsibility because a lot of the stuff I’m writing—especially on Next Thing—is from the perspective of a much more mature person looking back and reflecting on things that happened when I was a teenager, having a lot of time to say it and wishing I could tell myself like, “What’s up?” I had this rare opportunity the other night to talk to an actual 16-year-old that I saw myself in. It was really beautiful and crazy to do that. It’s scary because everything you say isn’t always going to be interpreted correctly.