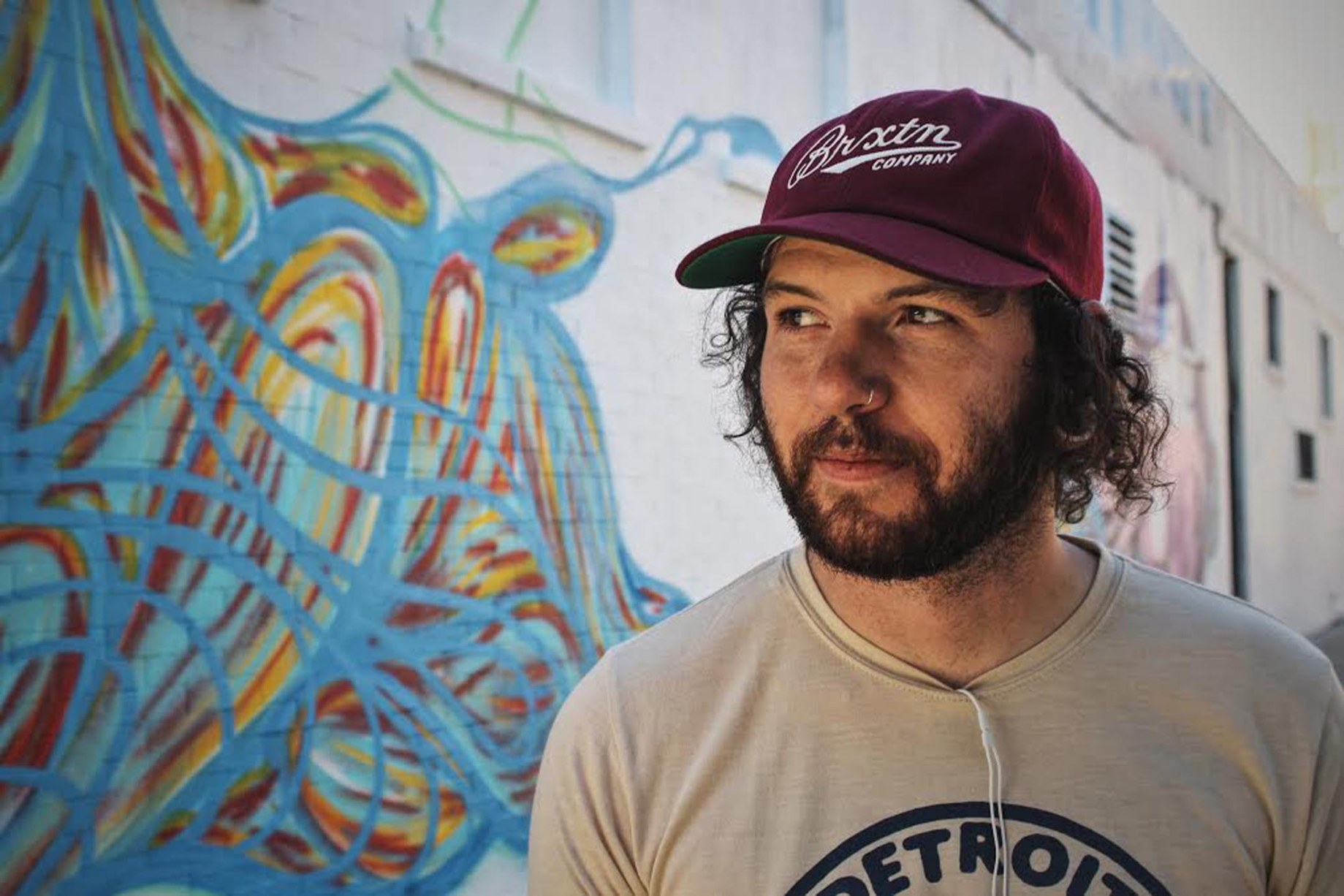 I first met the artist known as Mute0n a little over a year ago in a back alley of a Wicker Park laundromat. It’s usually probably not the best idea to walk up to a stranger underneath the rails of the Blue Line, but I’ve been following his work for so long and couldn’t pass up an opportunity to watch him in action as he painted his intricate High Brew Coffee mural in less than three days. 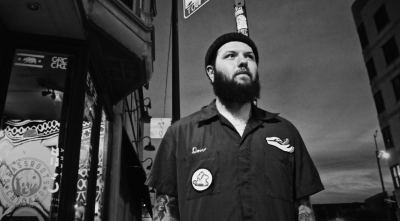 A man of few words, he lets his art do most of the talking for him—hence the name. However, if you take a look at the bold colors and animated designs of his Lowbrow style of art, his paintings speak volumes.

Since that initial meeting, I’ve follow Mute0n’s, aka J.W. Butts’, career as he’s gone from an underground artist based out of Chatanooga Tennessee to the painter he is today, doing spreads for Thrasher Magazine, painting murals for high-profile clients and now, getting ready for his first solo show in Chicago, “Head Hunters” at the Movement Gallery & Grassroots Chicago.

I got a chance to catch up with Mute0n this week, and aside from talking about Nathan for You and Wilco over some beers, we got to talking about his upcoming show, growing up in the South and how art saved his life.

You’ve said that art saved your life. Could you talk a little more about how you first fell in love with art and how it’s helped you out personally? 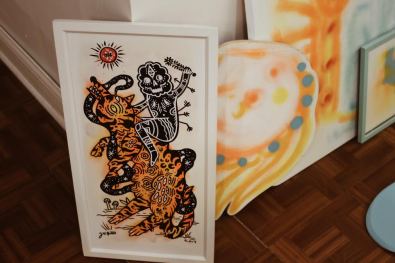 I always doodled and stuff, but I guess there were a few moments where I started to think that I could do this for a living and there was a purpose to it all. I was always searching for something that made me feel fulfilled and gave me a reason to be breathing. It seemed like art never really let me down. It always kept me motivated and searching and experimenting everyday. I’ve just gone through some pretty rough relationships with people that might’ve made me feel like there wasn’t a lot of worth. So I think I just latched onto art and it made me feel that if people would be into it, it would give me a feeling that maybe I do matter. It really helped me get through a lot of dark stuff. But I never really thought that it’d be something I could make a living off of. I always kind of figured I’d just be struggling and sweating in a kitchen somewhere and doing some really hard manual labor. I might get back to that one day, but for right now it’s working out pretty well.

The style of your work has a bold, cartoonish style that kind of draws on a lot of Lowbrow type of art like the Rat Fink stuff and Hi-Fructose type of designs. How did you come across the type of artwork your doing today? 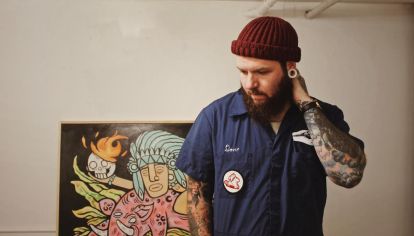 I’m always discovering new things and finding inspiration in different places. The water color style I used to do—I think that was in my early 20s when I was probably more manic and a little more stressed and anxious. As I get older, things simplify and I think that shows in the work I’m doing now. But, I’m always searching and I don’t know if I’ll ever be totally satisfied with the work. In terms of my style now, it’s always definitely by tattoo designs and old comics like Daniel Clowes and Charles Burns. I’m into lots of different stuff like Keith Haring and some abstract painters, too. I like to think that my work is very chaotic, but also some order. My interest in Lowbrow art probably come from when I started reading Juxtapoz like 12 years ago and that led into Hi-Fructose. That kind of stuff really helped open my eyes to that Lowbrow style, ‘cause growing up in the South, I was more exposed to folk artists—just like paintings of coke bottles and fruit and stuff. I mean, I definitely lean more towards the graphic Lowbrow style, but people like Howard Finster and Butch Anthony were big inspirations in terms of folk art, as well.

Your art definitely does have an organized chaos to it. Did you have any formal art training that helped you hone your technique, or was it more trial-and-error?

I don’t really have formal training. The idea behind it is to just make a bunch of horrible shit and keep experimenting ‘til I find something I like. That’s probably the most fun part to me about painting. I don’t think I get enough time to make as many mistakes as I used to. But I still have—even in this “Head Hunters show—paintings that might have three different paintings underneath them. 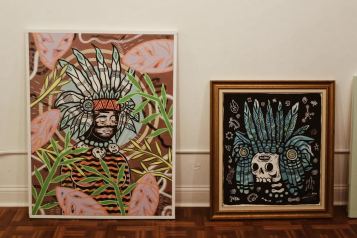 You mention growing up in Alabama and you’ve spent a lot of your art career around Birmingham and currently in Chatanooga. What are the art scenes like in these smaller Southern cities?

You do have to look for it, but it’s there. Sometimes you just have to weed through a lot of the shit to find the good stuff. But, there are some amazing people down there. When I was 19 I met a guy named Paul Wilm, and he’s a really interesting dude who lives in Birmingham. He’s really the first person I met who was able to make a living and live a happy life off of doing his art.

Obviously though, when you come out to places like Chicago, there’s a much larger community of artists and you’re always travelling to these cities to get your work out. Do you have any plans to move out to a new place that has a bigger community you could build off of? 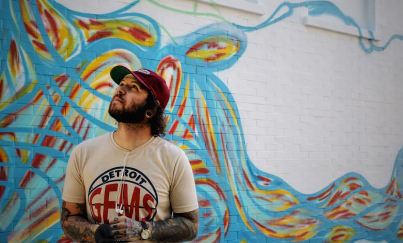 The plan is definitely to move somewhere bigger with more opportunities and more of a sense of community. Right now, there isn’t a load of competition in Chatanooga, and a lot of the push and drive I have to do is from inside. I think that in a city like Birmingham or Chatanooga, there just isn’t really a lot of people doing the style of art I do, so it’s pretty easy to stand out. It’d be nice to be around people that are way better and more established—just to have that kick in the ass. I want to make the best shit I can, and it’s important to surround yourself with these types of artists. Like I come here and see people like JC Rivera or when I go out to Austin and see artists like Jason Eatherly, it just blows my mind. 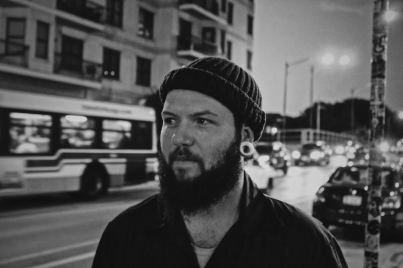 It seems like in the past couple of years, your work has really taken off. You’re making a living as a full time artist, have a spread in Thrasher coming up and now a solo show in Chicago. Could you have seen this kind of success even five years ago?

When I first started doing stuff to get my work into galleries, I used to have to send them slides, which was super expensive. So that’s why a lot of my first gallery shows are now. This is only my second solo show in the 10 years I’ve been doing art. I guess you just gotta keep doing it and eventually it’ll pay off. I never could have even imagined five years ago that I’d be having a solo show in Chicago. Even having all these people that want to see my work, it’s kind of crazy to think about having “fans.” I’ve painted things in the past and I’d think to myself, “This is it. This is the one that’ll catch their attention.” But, art was always really just a meditation for me to help me feel valuable.

It must be pretty exciting to have your own show in Chicago now. How did the “Head Hunters” show come about?

This show was another walk-in, show my stuff kind of thing. I was up here last November and came across a flyer for this gallery. I can’t remember the artist, but I wanted to come check out there stuff. And from there, I just started talking to whoever was working in the store and showed them my work. So his boss hit me up a week later and we started planning this show since then. The idea for head hunters comes from the time I was staying out in LA and I seeing a lot of South American and Mexican-inspired artwork that was just super inspiring to me. I really dig the Aztec vibe and how they use shapes in their work. It’s totally an aesthetic thing to begin with, but I always seem to find meaning in my artwork after I see finish. 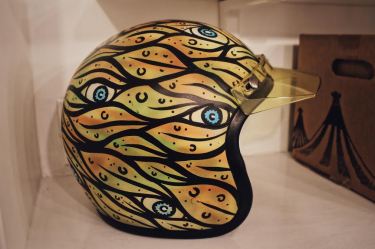 Is the “walk-in, show your stuff” thing a pretty common way that you get your work noticed in these other cities?

Definitely. A few years ago, I came up to Chicago with a friend just to see what it was like and we stumbled into Galerie F. So when I decided to come back here for my 29th birthday, I just went around town and tried networking to see if I could get any of my art up around town, ‘cause I really dig the city a lot. I ended up going back to Galerie F and talking with Billy [Craven] and I showed him some of my stuff and he dug it and mentioned there was a group show coming up and wanted me to be in it. So that was the “You Are Beautiful” show and that was probably the first thing I did in the city. And ever since then, it’s just kind of gone from there. If I’m in a new city, I’ll just try to go door-to-door and be that annoying kid that’s like, “Hey, I make art. Look at it.” 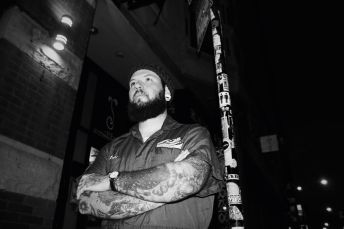 Obviously, it seems like making art is something you’d be doing one way or another. Aside from client work, do you feel that there is more of pressure now that you’re selling your work to make something that would sells easily as opposed to what you really love to paint?

Obviously you want to sell your work, but the reasons for money vary a lot of the time. I want to be able to keep doing it and do bigger projects, so that’s one of the reasons for money in my opinion. I don’t really have the best relationship with money, though—it’s kind of a love/hate thing, I guess. Like, I need it to survive, but the thing is, even if I didn’t have fans of my work, I’d still be doing the same thing I’m doing now.