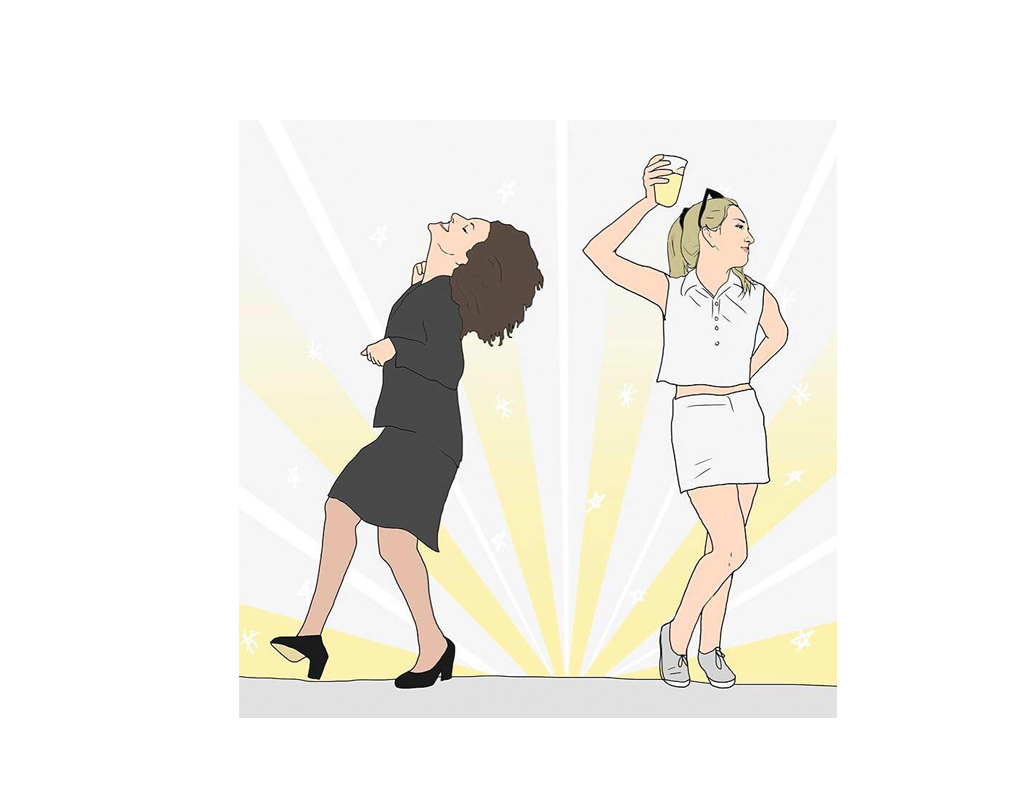 It’s always nice to find other people in the world who enjoy television as much as you do. That’s probably why at least a quarter of the people I follow on Instagram are artists specializing in the new Pop Art style of TV-inspired graphic design.

A perfect example of that style is Australian artist Twyla Skeggs, aka Twylamae, known for her colorful takes on comedies like Seinfeld, Broad City and Curb Your Enthusiasm—to name a few. Her own unique artwork, which she’s labeled as ‘High End Sitcom Fashion,’ is a mix between pop culture-obsessed fandom and contemporary art love.

Twylamae’s artwork takes iconic scenes, phrases and hilarious moments from these funny sitcoms, and puts her own artistic spin on them. Think Seinfeld meets Basquiat or Broad City with a Shepard Fairey twist, and you’ve got Twylamae.

While her illustrations do often take a note out of art history, Twylamae’s work—for the most part—is just simply fun eye-candy for the comedy nerd in all of us.

I got the chance to speak with Twylamae about Seinfeld, the new style of Pop Art and using social media to her advantage.

Did you grow up sketching based off of your love of television shows and is that what eventually led to your design work based on shows like Seinfeld and Arrested Development? 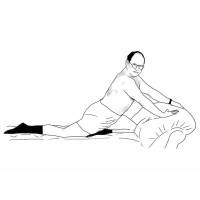 Some of my first ever drawings were of Bart Simpson actually. I’ve always had an intense passion for sitcoms and pop culture, but I’ve also gone through a lot of different stages with my drawing. I used to sometimes get frustrated or upset when I couldn’t find inspiration for drawing things, but Seinfeld is an endless source of inspiration; especially when combined with other things that I love such as modern art and music. 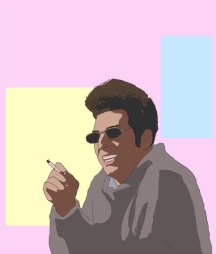 How did you get the idea to create art and merchandise based on these TV shows?

It was actually during my postgraduate graphic design course that a project inspired me to draw from my love of Seinfeld, and everything sort of clicked into place because I really enjoyed it. As for turning it in to merchandise, I’d always had an interest in doing T-shirt design, ironic and simple sitcom references seemed like a pretty good idea at the time—turns out people agree.

With copyright and licensing issues surrounding a lot of shows, do you ever run into or fear that you will run into issues with the creators of the original characters you repurpose for your artwork?

There’s a small amount of fear. I always figured my work would never get big enough for the creators to even notice. I always try to make sure that my designs are appropriated enough to seem removed from the series and unique in their own right. My designs are more of an homage to these TV shows and how endearing and relatable the characters are, whilst putting my own spin on them. Although, if I receive any cease and desist forms then respectfully I will bow out.

In the past five or so years, a lot of galleries have opened based around the idea of pop culture artwork. Galleries like Gallery 1988 in LA has had shows featuring Seinfeld-inspired works—and Be Street had a show featuring “bootleg” Simpson artwork that the creator even showed up to. Do you feel a shift in the art world where this type of repurposing of art based on well-known TV and film characters is finally getting recognition in the high-end art world?

Wow, that’s really exciting to hear about those sorts of exhibitions happening. My connection to that world is through Instagram, and I follow quite a few like-minded artists and illustrators who work with similar material to me. There definitely seems to be a rise in this trend of drawing from pop culture and TV shows, I feel like in this digital age everyone loves to see things that they recognize, things they relate to and things that can make them laugh. If you can combine those elements and turn them in to works of art, people will respond well to them. We’re all sort of slaves to television and tabloids, it’s part of our daily lives; it feels good to make light of that. As for shifting this sort of work in to the high-end art world, I don’t see why pop culture artwork shouldn’t be taken seriously. I don’t take myself seriously, but maybe that’s part of why it works.

Pop Art is an art form that’s gone through several different styles over the years. How do you think the current form of pop art is different from the past?

At it’s core pop art is still the same, it still challenges other forms of art and it still draws from consumerist culture. But of course the subject matter is based on what’s current, and perhaps it’s a little darker and more tongue in cheek given the scope of what’s happening in the world today. Also I feel like there’s more of a trend to reach out to people’s personal experience with pop art today, rather than just a narrative or commentary on society. 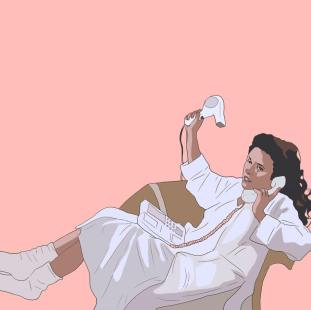 There is plenty of art that is viewed as bootleg artwork—like that sold in shirt shops around China Town. What is the distinction of repurposed art that yourself and artists like Thumbs and Uncle Strawberry do from “bootleg” work?

Rather than replicating something to seem exactly like it’s original just so we can sell it as a cheap knock off, we are drawing inspiration to create an entirely new work of art that has a sense of familiarity combined with our own artistic integrity. I’m not about cutting and pasting, I’m continually developing and refining my style so that I’m creating products that will be recognizably “Twylamae.”

The pop art scene in America is heavily influenced from street art and vinyl art. Hanksy, a New York artist comes to mind for blending pop culture figures and dialect—and he is kind of at the forefront of the scene. What is the scene like where you’re from?

There’s definitely a rising community of makers and artists that are making a name for themselves through pop art. I’ve taken part in a few exhibitions and markets and it’s been great to see like-minded people. There’s people who are making really awesome greeting cards, enamel pins, there’s even a George Costanza themed bar and a Larry David cafe that’s opened up in Melbourne. Pop art and pop culture are definitely on the rise here, and it’s very exciting to be a part of it. 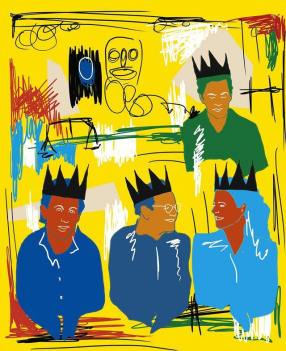 A lot of the shows our art is inspired by has a hugely dedicated following that make its own fan art—whether it be on Etsy or their own sites. How do you manage to get your art to stick out in such an overcrowded field?

I try to keep everything fresh and exciting whether it be through cross referencing with other aspects of pop culture or relating things to a feeling or emotion that a lot of people are likely to be experiencing. I guess I’m trying as much to inject my own personality and sense of humor in to my drawings, which perhaps makes it a different experience to other things in the field. People love self-depreciation, it appeals to the George Costanza in us. As for what I sell on Etsy, I always try to design my products in a sophisticated and fashionable style, rather than slapping an image on a T-shirt. Just because a T-shirt is funny or ironic, doesn’t mean it can’t look cool at the same time.

Does your work come directly from the show itself? How do you take an already well-known character or show and make it into an original piece?

I always try to take quotes and images from the show and alter them to relate to current day life. The well-known character is really just a vessel for me to put a new idea forward. I would feel lazy if I posted or created something that didn’t have a twist or a new form of appropriation. Combining references from different shows and works of art is particularly satisfying for me. 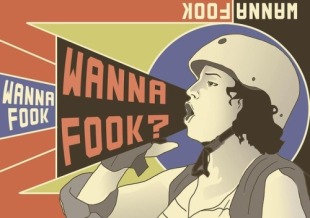 Art is almost always a reaction to the past era. Why do you think this type of artwork of popular culture repurposing has become so trendy in recent years, and is it a reaction to a past art era?

I think specifically the Seinfeld stuff is a reaction to the recent 90’s revival in fashion, the “Normcore” trend was practically based on Seinfeld clothing. Artwork based on popular culture echoes the Pop Art era in a way but also I feel it’s just a natural reaction to everyone’s addiction to the digital age—iPhones, Netflix, all that.

Have you ever gotten some sort of recognition from the people affiliated with the shows your work is based on?